Note from Frances’ Trip to Ireland

Apr 2008: Frances Wilson, instructor of the Culinary Program returned to her native Ireland for a visit during March. She visited Ballymaloe Cooking School in east Cork as well as Cork City. She also spent time with her family in Dublin. 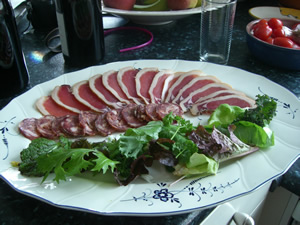 When I left Ireland almost 20 years ago it was not considered a food destination. As a chef I was often the butt of many a joke by people who considered the title “Irish Chef” an oxymoron. But since then Ireland has gone through an economic and culinary revolution. Artisan food producers abound, great restaurants are easy to find, farmer’s markets are sprouting up everywhere and while Irish people still love their spuds, they are asking for them by names such as Pink Fur Apple and Maris Piper.

Ballymaloe Cooking School and House in East Cork have been the center of this food revolution. Myrtle Allen and her daughter-in-law, Darina have been instrumental in improving the quality of food and inspiring a new generation of cooks in Ireland, Myrtle through the restaurant at Ballymaloe House and Darina through the cooking school.

Situated in East Cork in the south west of Ireland, Ballymaloe is surrounded by rich farmland. Here the Allen’s really live out their principles of sustainability. Arriving at the school you are greeted by brightly plumed hens who supply most of the eggs and around the corner in a large field were with two of the largest pigs I have ever seen. There was a gang of piglets squealing merrily in the background. They have magnificent gardens producing fruits and vegetables for use in the school, at the restaurant and for sale at the local market.

Lunch at Ballymaloe House Cafe was simple but delicious. When was the last time you were wowed by a lettuce leaf? I had an open-faced sandwich of homemade brown bread, lettuce and local smoked mackerel. The lettuce just popped with flavor and crispness. The mackerel was plump and juicy — a reminder that great ingredients need little or no help.

The next day I was on a mission, I had been instructed to buy some local ingredients to bring back up to Dublin for Easter dinner at my brother’s house. Food has long been the focus of our family gatherings; some would even say it is a family obsession. My mother is an avid gardener and adventurous cook. She was gardening organically before the term was coined.

Saturday is market day at Midleton a few miles from Ballymaloe so we headed there first. It was a cold, windy and wintry March day but the market was bustling with activity. There were piles of winter greens, carrots and turnips for sale along with locally caught and smoked fish and cured meats. Great breads stacked in baskets were hard to resist. I loaded up with smoked meats and fish and then headed into Cork City to visit the English Market, a covered market that can trace its origins back to the 1600s. It is now a center for much of the locally produced food. I spent a happy hour wandering around checking out all the meats, cheeses, fish and breads. A phone call was made to my brother asking what I should not leave the market without. I got instructions to buy some mutton to add to the menu for Easter Sunday. A little wary, I had memories of strong tasting, slightly tough meat that had to be stewed for hours, but I complied.

Back in Dublin, my mother and I arrived at my brother’s house to help prepare the feast. While the mutton was slow roasting in the oven, my brother harvested from his vegetable patch one of my favorite vegetables that I don’t see often in California, Purple Sprouting broccoli. My niece helped me to assemble the appetizer platters of smoked fish, smoked prosciutto and chorizo along with greens from Ballymaloe that I had bought at the Midleton Market. The mutton was all it had been promised to be, full-flavored and tender. My sister-in-law and niece had made some fabulous spelt fairy cakes but sometimes nostalgia wins and my mother’s Lemon Drizzle Cake had it all, a beautiful, dessert worthy of a top Parisian bakery that transported me to my youth when all the best food was made at home.