This is a traditional Burmese recipe that can be served for breakfast, lunch, or dinner! It is delicious! 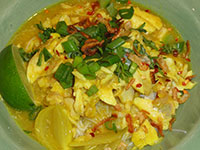 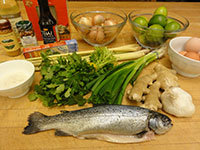 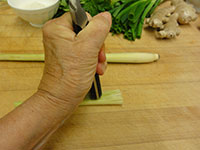 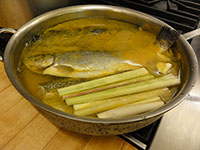 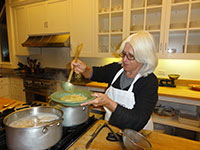 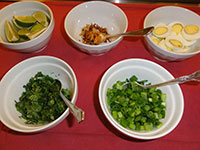 To prepare the fish, rinse carefully and salt lightly.

To make the broth, in a wide pan, put the shrimp paste, turmeric, garlic, ginger, and lemongrass with 4 cups water.  Put in the fish and bring to a boil.  Lower the heat and simmer, covered, for about 10 minutes.  Remove the fish.  Pull the cooked fish off the bones, flake, and set aside.  Add the bones and skin back to the broth and boil for another 10 minutes, then strain and discard the solids.

To make the paste for the soup, place the lemongrass, ginger, and garlic in a food processor with a little salt and process to a coarse paste, or make into a paste with a mortar and pestle. To make the soup, heat the oil in a large pan over medium heat, stir in the turmeric, cayenne pepper, and minced shallots and cook for a few minutes, until the shallots are softened.  Stir in the lemongrass-ginger paste and cook until aromatic, about 3 minutes, stirring.  Stir in the fish sauce and the broth. Bring to a boil.  Mix in the toasted flour mixed with 1 cup cold water and bring to a boil again, stirring.  Let simmer gently to blend the flavors, about 5 minutes.  Add the whole or halved shallots and continue to simmer another 5 or more minutes until the shallots are softened.  Stir in the cooked fish, taste and add fish sauce for additional flavor.

Meanwhile, to make the fried shallots, put the thinly sliced shallots with the peanut oil in a small pan over medium-high heat.  Bring the heat up and slowly cook the shallots about 10 minutes, carefully stirring and browning them without the oil smoking.  Remove the shallots and let cool on paper towels.  Reserve the oil.

When ready to serve, bring a medium pot of water to a boil.  Stir in the noodles and boil gently until softened, about 1 minute.  Drain well and transfer to a large bowl.  Drizzle on the shallot oil and toss gently to prevent the noodles from sticking together.

To serve, put out bowls of fried shallots, chopped green onions, and chopped cilantro, limes, and red pepper flakes.  Place a generous mound of noodles in each guests bowl, and laddle over the soup making sure each serving has fish and whole shallots.  Let the guests help themselves to the garnish.  Serves 6.  MSR (Recipe adapted from BURMA Rivers of Flavor by Naomi Duguid)