My Trip to Africa

Mar 2010: When my friend, Carol, called to ask me to join her and a group of women on a safari in Tanzania in February, I had to say yes! She did, however, point out that this would be my first trip abroad that wasn’t food oriented. But, I didn’t care—it has always been a dream of mine to go to Africa! 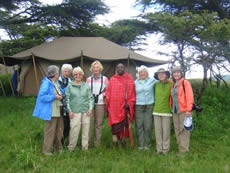 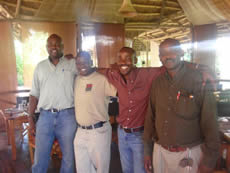 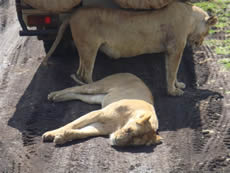 I broke up the flights to and from Tanzania by spending three nights in Amsterdam with my longtime friends Cathy and Mickey and had a great time getting reacquainted with old Amsterdam. From my brief experience of eating in small restaurants it appears that the food there is fresh and healthful with a slight French influence. I loved a cafe called Stout which had a very imaginative menu that worked. And, I loved watching how many people use bicycles as their means of transportation—even through rain, sleet, and snow.

Arriving in Arusha airport was a shock. First of all, it was very hot, and the crowds trying to get visas and passing through immigration were very disorganized. However, we were met by our guides and drivers who took great care of us from then on. Driving back and forth through Arusha was eye-opening. Although it is a city of almost a million people, it appears that the whole population walks (and lives) along the sides of the roads. From there we travelled in two cars up to Tanangire National Park then on to Lake Manyara National Park and Ngorongoro Crater.

The truth is that seeing the magnificent countryside and wild animals while standing up in a Toyota Land Cruiser, which is driving over bumpy dirt roads for hours, is not my idea of fun. I have to say that it was very exciting to see so many elephants, zebras, flamingos, cape buffalo, gorillas, and giraffes in their native habitat; however, I would much rather meet some of the native people and get a glimpse into how they live. And, I really loved seeing the young people herding their goats, cattle, and donkeys along the side of the road. Often, the herders are young children, and they are always dressed in colorful blanket-like shawls. 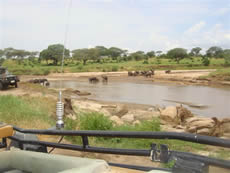 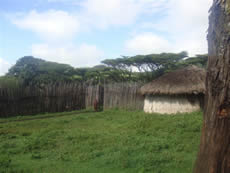 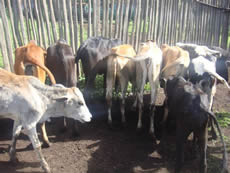 So, what did I learn of the Maasai and how they live? First, of all what sweet, welcoming people they are. They basically live with their domestic animals and earn their living from them. In the wet season, a family may live in a form of a compound where the center is an enclosure to keep the herd safe at night. This is made of thin cedar sticks. Around this enclosure will be some “mud” huts, one for the husband and one for each of his wives. A man’s wealth is determined by how many cattle he has. The more cattle, the more wives he can have. The chieftain of the village who ate with us and invited to his home, has three wives and ten children. He told us the children may not all look like him. He was a very kind man who had spent two months in San Francisco some years ago learning English. He is the chieftain of 2,500 Maasai. In the dry season, they move with their herds in order to find water. Always, there are dogs along with the herds to warn of predators by barking.

The huts (in the wet season) are made of sticks, covered with mud (or dung) and grass roof. Inside is an area for the baby goats and calves to keep them safe from predators. There is an area for cooking over a wood fire and a bed for the wife and her children. The husband may come on a prearranged night, but if he finds a spear outside the door of his wife’s hut, it means she has another man there so he is not welcome. The Maasai have no problem sharing wives as long as the other man is in the same age group. (One of the photos is of me coming out of one of the huts with our host (the chieftain) who is 55 years old and one of his wives who is 35 years old. They were very welcoming. 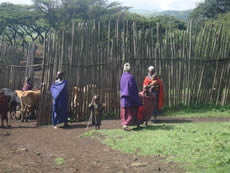 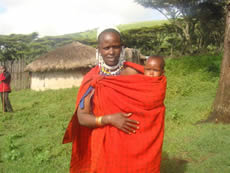 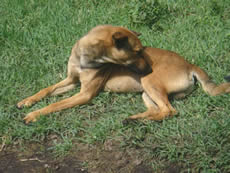 It appears that the children are raised not just by their mother but by all the wives and that they are raised in a warm family environment. They may herd the animals at a young age; but by law they have to go to school when they are seven. Some of the children walk for many kilometers to get to and from school. We were fortunate enough to visit a school in the area where the children lined up to welcome us and sing us a song. Before they did, each child threw a stick of wood on a pile. This was his or her payment for school. They bring a stick of wood every second day. The teachers live at the school, and everyone eats a hot meal midday. For some children that meal is their only meal. The children were very sweet. When we arrived at the village the children lowered their heads to be touched as a gesture meaning “peace be with you.” And, when I was driven away from the school, many of the children wanted to touch my arms and hands.

From what I understand, the main food staple is ground dried corn made into a cake. The eater will make a small ball of this and press a cavity into it to eat a meat or vegetable stew with his or her hand. Breakfast could be something called finger millet, a watery mixture that could have sugar and milk or cream added. In a roadside market we saw only dried corn and dried beans being sold. And, there was a special room for what they call “BBQ.” For feasts and markets and restaurants they may grill chicken, goat, or beef; but the big protein source is beef. Sometimes, the young “warriors” go off to an outdoor enclosure or cave for called a “Ulpol” for BBQ meat, where they can eat as much as they can. In the high country above Ngorongoro Crater, the warriors cooked a goat for us over an open fire. It was a memorable experience. Generally, there is no dessert other than fresh fruit. 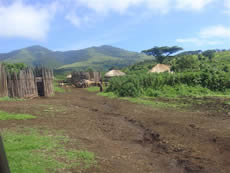 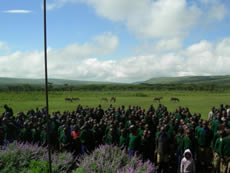 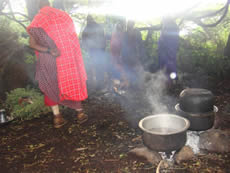 Going on a safari in Tanzania was fantastic. I am so glad I went and grateful to the women I travelled with and to Onesmo and Cobra for being such great guides. However, Carol was right, there wasn’t much to learn about the food. First of all, Tanzania has only been a country since 1964 and even now it is made up of 128 different tribes. They do have a common language taught in school which is Swahili; but there is not really a common cuisine. So, what I have done for you is put together a menu that I am pretending I learned in Tanzania. The truth is that I got most of the ideas from Marcus Samuelsson’s terrific cookbook called THE SOUL OF A NEW CUISINE. So, here for you is my menu of mock African food.

Signature Street Foods of Singapore
So, You’ve Always Wanted to Run a Restaurant?